Near the end of ASIS CTF, in which vulnhub-ctf took part, zer0w1re decided to release his first VM called knock-knock! Naturally, I had to download it and give it a shot :)

The name already gives a big hint. I supposed I had to deal with a port-knocking deamon like knockd. I opened the ova in VirtualBox and booted the virtual machine. I ran a ping scan with nmap and then a normal scan.

The scan took ages to complete, but did give me exactly one port to connect to. If that isn’t a clear path, then I don’t know what is. Connecting to 1337 with nc returns a list of three numbers. Not just any kind of numbers, no! They had to be port numbers. Let the knocking commence! I whipped up a small Python script to automate it:

Probably not the most elegant way of doing it, but I was still in a CTF mindset ;) I ran the script and then nmap again, but found that nothing had happened! What could be going on here? I tried to debug script a bit, added the try/except blocks to make it robust, but I couldn’t figure out why it wasn’t working. Maybe not all of the knocks were getting through? I decided to run the script continuously:

After a while, I ran nmap for the umpthieth time and lo and behold, ssh and http were open! Later, when I rooted the box, I had a look at the script that sets up the port knocking. It randomizes the port order, so there’s a one in six chance that my script gets it right. I modified it so that it completes the port-knocking every time:

I had no credentials for ssh so I fired up a browser and pointed it at 10.8.7.101. I also started dirbuster just in case. 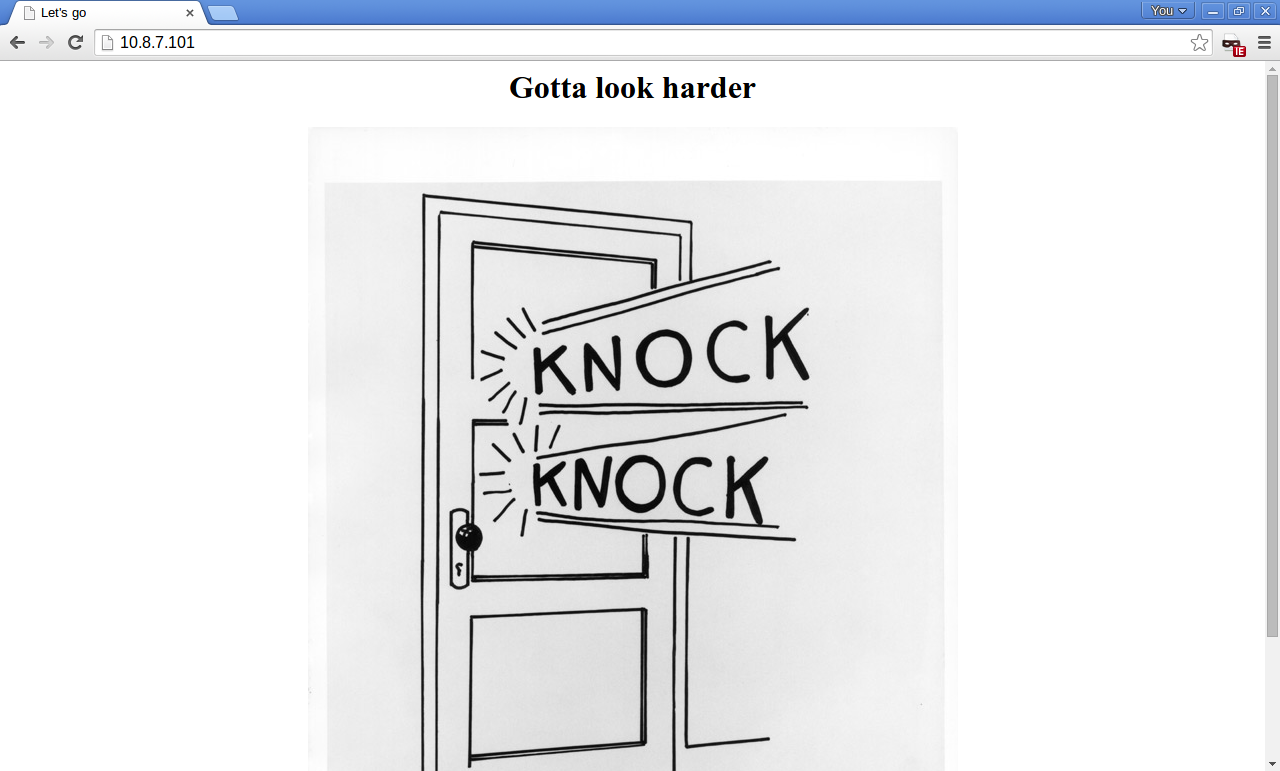 Not much was on that webpage, not even in the source. I grabbed the image and poked at it using stego tools such as stepic and outguess, which came up negative. A quick strings on the jpg revealed something much more interesting:

I figured that it was worth a shot, even though the credentials looked weird. Needless to say, they didn’t work. I switched them around as well but no luck. The strings looked mangled, so what could have been done to them? rot13 maybe? Indeed, after dumping the strings in rot13.com, I got something that resembled a user name: nosaJ, which is Jason reversed. The same was done for the password and the combination that let me in was jason:jB9jP2knf. I could ssh in and was presented with a shell! I pressed ‘up’ to view the command history, but .bash_history was symlinked to /dev/null. I fixed that and went on. ls -alh showed a setuid binary called tfc. Owned by root, I might add! Turns out that jason actually has a restricted bash, but that was quickly solved using nice /bin/bash (after Persistence, I learned four more ways of escaping rbash ;)).

Looking at this tfc binary, it seems that it is a “tiny file crypter”. Playing around with it, I was able to encrypt a file and decrypt it again. This meant that it was doing some kind of symmetrical encryption.

When I downloaded the first public version of this VM, tfc still allowed symlinks. It wanted the filenames to end with .tfc, so I made a symlink to /etc/shadow, used that as input for tfc, decrypted it to get the shadow file. I then copied the line containing the hash of jason’s password and overwrote the line for root. Reversing the process again overwrote /etc/shadow and I had root! However, this was not intended and zer0w1re released a fixed version…

So I had to exploit tfc the proper way. Now, this binary was made by c0ne, so I was in for a treat! I first gave it a huge input file:

Well, well, well, a segfault! This looked promising. Unfortunately, gdb was not installed on this VM, so I transferred the binary over to my box and repeated the process.

Hmm. So we have a segfault, but eip is not overwritten by 0x41414141. Something funky is going on! I assumed eip was being overwritten by the encrypted bytes, so I needed to first encrypt my payload before tfc would process it and decrypt it again. Over at #vulnhub, recrudesce dropped a nice link for an online disassembler. I decided that this was a nice moment to give the Retargetable Decompiler a spin! I uploaded the binary and using the output and objdump, I started analyzing the binary. 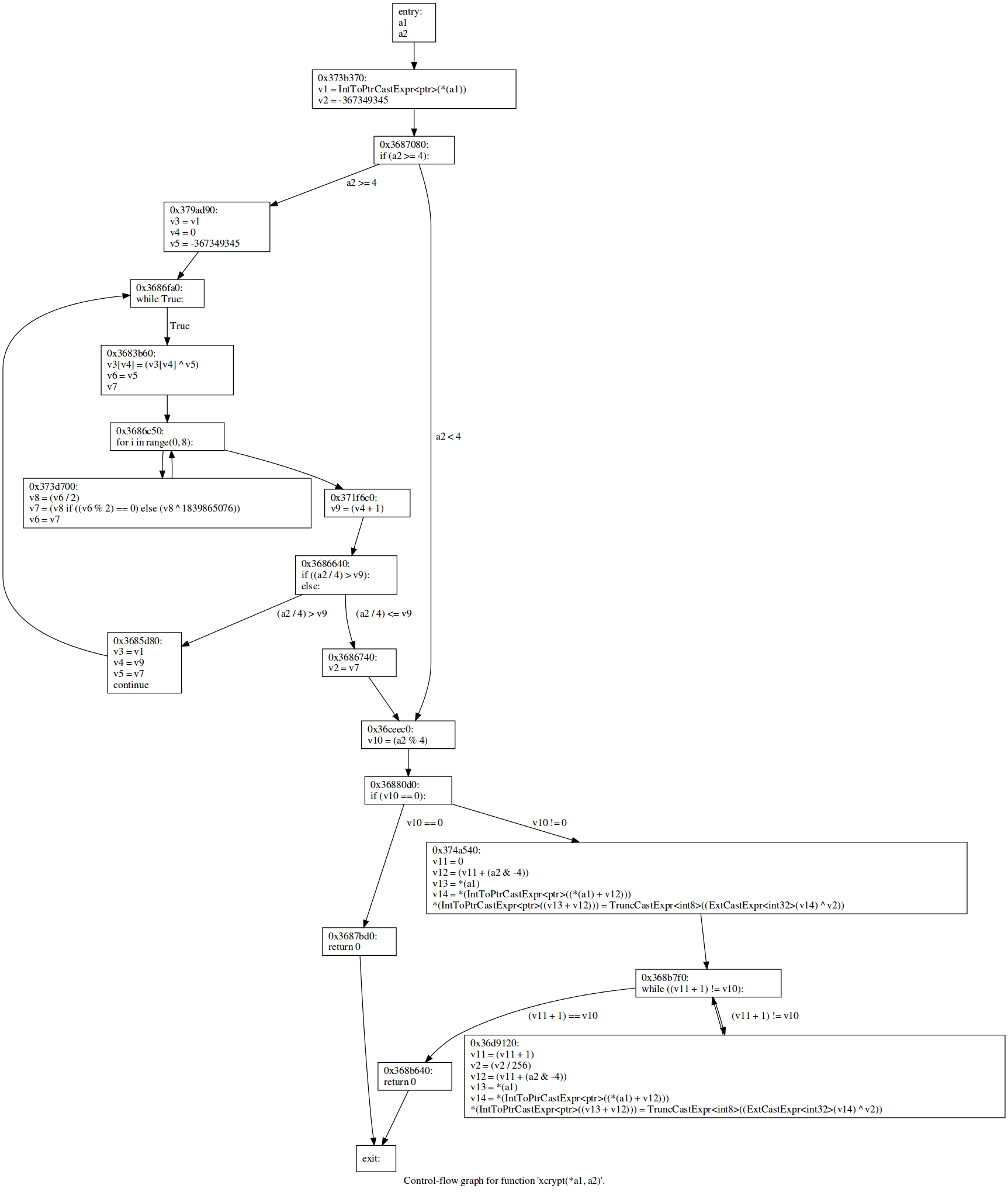 It boils down to this: the binary takes an input file, read it four bytes at a time, and encrypts it using the xcrypt function. For the next four bytes, it shuffles the XOR key around. It loops until there are less than four bytes remaining, which are also encrypted. I decided to rip and copy this decompiled C code as much as possible. I have changed the names of the variables a bit:

I wrote a very, very ugly piece of Python do the encryption for me:

Like I said, a CTF mindset and some very ugly Python code, but I was now able to encode my payload (updated version at end of post). I gave it a spin:

Yeah! I was able to overwrite eip! I narrowed down the buffer and determined which part was responsible for overwriting eip by trial-and-error and looking at the stack in the coredump. I finally found:

Okay, great. The stack is executable so I could stash the shellcode there. ASLR on the remote machine was enabled, so all I needed was a jmp esp to jump to the shellcode. I found one conveniently located in the binary, but I really had to dig:

With that hurdle taken, I first verified the exploit by making the shellcode a bunch of int 3s. This made tfc crash with SIGTRAP, confirming that it worked. I used bind@64533, my favorite shellcode. Finally, my exploit looked like this:

This generated the file out2.tfc. I verified the exploit locally, after which I transferred it over to knock-knock. I ran the exploit and connected to localhost:64533 with my fingers crossed:

From here, I could view the flag: 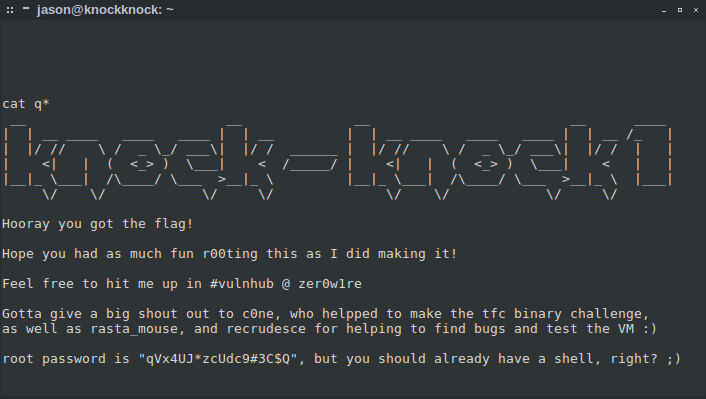 Or was it? leonjza came up with a nice idea, why not use the core dump instead to extract the encrypted payload? I spent some time and came up with the following bash script. It abuses the fact that the encrypted file will start with the same bytes every time. This script generates the exact same payload as before:

I will leave a ROP exploit ‘as an exercise to the reader’ :) knock-knock was a fun VM and so thanks to zer0w1re and c0ne!

Updated enc.py, contained another error but should be fixed now: